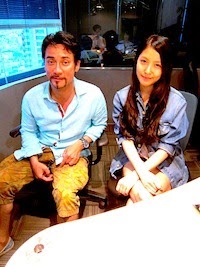 BoA and Chris (the host) drink beer, munch on Bagna Cauda, and talk about music and movie.

Chris debates with himself whether he should call her BoA-chan or BoA-san. He seems comfortable with her and even speaks informally to her.

B:So we do really drink here (the idea of drinking alcohol on shows must have sounded weird to her). The veggie looks expensive.

B: One day, my brother let me listen to MJ, Boyz II Men, and Mariah Carey and play MJ's music vdos. I was impressed.

B: MJ didn't do moonwalk in the MV. He did it on Motown Anniversary stage.

B: So I started looking at his old works and stuffs.


*talk about how she became a recording artist. (following her bro to an audition, blah..., how her bro directs her MVs now)*

B: Since I studied Japanese when I was young, I didn't feel its difficulties that much. My juniors who cross-over to Japan said the language was very difficult. When asked the difference between [desu, deshita, deshitaga,kedo], I cannot answer.

C: Who are your musical influences other than MJ?

*talk about her love for Justin Timberlake*

B: I like him since his Nsync days. He gets cooler and cooler as he ages. His music sounds very manly. He looks so good in SexyBack MV. I really like the song Senorita.

B: I bought his concert DVD. It was the tour of his album that has SexyBack in it. He was so cool.

C: I went to his concert in Tokyo and all the female audience are pretty and stylish.

B: Of course it's Japan.

B: Yes the audience do Lady Gaga cosplays. It's fun.

C: What about Beyonce? Don't you get influence from her regarding to dances?

B: I prefer masculine style so it's Justin and MJ for me. The dance I do myself is also more masculine than feminine.

B: The song reminds me of Rock with you which I love so it feels like I've got a big surprise present.

*play Rock with you*

C: I like [Off the wall] album the most.

B: That's the first album MJ works with Quincy Jones right? This combi is the best.

C: Yes MJ working with others is good too but it's the best with Quincy.

B: I met Quincy Jones privately in Korea and he was like a normal grandpa, not a person who's created legends. He's very gentle and friendly. The tribute concert in Japan, I wasn't scheduled to appear at first but he was like 'How's BoA doing?' and I've got contacts after that.

C: After the concert, there was this long line of people requesting a shot with him and he kept smiling throughout. Quincy with Ray Charles is also good.

B: In the movie Ray, Ray would shout Yo Quin! Yo Q!

B: Jamie Foxx. He was something! That singing and acting. I like his singing voice. In the animated movie Rio, he also sings. Will.i.am voice-acts and sings in it too. The OST is nice.

B: Jamie Foxx's talented. He got all aspects in entertainment. Singing, acting and comedy.

B: Yes they're at the top of UK chart now.

B: Recently I'm into electro-classic. SomethingALaMode is also of this genre. I've always like guitar and strings so when I write my own music, there's a lot of guitar, strings and piano sound.

B: Yes the actress is also Japanese. And I heard kiyoro in the song and I thought what's kiyoro? After checking, turns out it was Kyoto. LOL

B: I watched their lives in youtube and they really brought violin and cello to the stage. I think there's probably a  drummer. There are 4 members. One is violinist, one is cellist. I'm not sure about the other 2.

B: A while ago, I went to see Bruno Mars in Korea. Tickets were hard to find but this is a must-see concert for me so I went and it was great. He was cute dancing. It was fun.

C: Yes he did funny things like impersonation of Katy Perry before.

B: Really? wow I must search for it. Oh Didn't Justin Timberlake did Beyonce's Single Ladies parody before? That was funny.

*play Just the way you are*

*talk about SomethingALaMode some more. BoA said they're french and only do the music. vocal changes for every song*

B: In this album, there's this one song which is a collab with Karl Lagerfeld. I wonder why it's Karl? (*Karl Lagerfeld is a designer, not a musician.)

C: I've never heard of them before. The song is nice. I'm gonna go get it off itunes after this.

C: This is unexpected. That you'd listen to CREEP.

B: I don't look like I'd listen to Radiohead?

C: Well I thought you'd listen to songs that you can dance to.

B: I move to this song too. LOL Well, I only like this song from Radiohead.

B: They absolutely won't play this song live.

C: They did it once though, at summer sonic.

C: Do you sing this song at karaoke?

B: I usually don't go to karaoke.

C: What do you do in your free time?

B: I went to a movie the other day. The new ape film. I didn't watch the first film though. The Apes were so cool! I became a fan of Caesar.

*BoA gets very excited here. Even speaks in English. Maybe b/c of the alcohol? LOL*

C: But he's a chimpanzee.

B: LOL Even Chimpanzees are this cool, real guys must work harder.

B: I don't know about that but I really like Caesar's way of thinking and heart.

B: LOL but recently, I watched [Her] and [Grand Budapest Hotel]. I heard that guys would connect with [Her], but I also connect with it. Seems like I like movies that guys like.

C: The cinematography in [Her] is beautiful.

B: Yes. Spike Jonze's (the director) movies have beautiful cinematography.

C: It's SF but doesn't feel SF. The message is good too.

B: Don't you think it'd happen for real in the near future? I'd go buy it right now if that kind of assistant is available. The song by Scarlett Johansson is also beautiful. If there's really such an OS, I'd ask her to make music with me. But how to divide up royalties?

B: Have you seen [The Grand Budapest Hotel]? The cinematography is so good I bought the Bluray. You definitely have to see it. There're a lot of cameos too.

C: Do you have a nice home theater set at home?

B: No. I go watch movies at the cinema. I don't like watching from small screens.

C: Do you go alone or in group?

B: Both. I think Koreans love seeing movies. There're theaters everywhere so you can see one conveniently without planning. And since there're many movie-lovers in Korea, Hollywood stars also go there to promote movies.

B: Seol Gook Yeol Cha(*Snowpiercer)! LOL I don't know what it's called in Japanese though. Tilda Swinton also stars in it.

C: Is that so? There's this one about monster in a river.

B: Gae-Mool(*The Host)! LOL It's like we're playing a speed game.

C: Yes it's by the same director.

B: LOL and we're talking about it now?

B: I really like the phrase "jibun shijou saikou no"(Best in one own's history) in the lyrics. Doing your best every time. I'm also like that too. I'm the type that wants to enjoy working so I'd like to top myself every time I do everything.

C: How are you doing right now?

B: The best! physically and mentally. In Korea, we count age differently so next year I'll be 30 Korea-age. Weird feeling but I don't hate it. I actually like ages ending with zero because it feels like you can reset your life again.

C: Do you like performing better or working behind the scene (production stage) better?

B: I've never held concerts at NHK Hall before. I performed there on events like Kouhaku but never solo live so I'm looking forward to it.

C: Right. You're not a kid anymore so it's BoAsan

--------------------------------
(after program finished)
B: Sapporo beer is delicious. LOL well it was refreshing to me talking about music and movie on a program. It's like talking with friends. My friends and I often gather together, drink beer and have conversations like this too. So it didn't feel like work, more like having fun today.

Email ThisBlogThis!Share to TwitterShare to FacebookShare to Pinterest
Labels: interview

My tweets about BoA